For two outdoor enthusiasts who love to spend time climbing up mountains but not always climbing down, backcountry ski-touring in seems sublime. The concept is simple: you hike up mountains on skis aided by the fairly unilateral friction provided by skins, and once you get to the summit, the skins come off and you glide down on a beautiful powder slope. Sounds great, absolutely blissful!

When we decided to give it a try and began planning a two-week vacation in the Canadian Rockies for the end of February, we were imagining ourselves amidst stunning snow-covered mountains, un-phased by the fact that neither of us knew how to downhill ski or how to avoid avalanches. Here is how this story goes…

We started off the trip with an avalanche course in Revelstoke. We held back our laughter when the instructor began talking about cornices with an accent that really made it sounds like he was saying Curniss every time. “Never trust a Curniss”, “Curniss’ are unpredictable”, “you want to stay away from Curniss’”. He also drilled down a few other messages over the course of three days. “Watch out for surface hoar!”, “the slabs are the killer; all you need is enough snow to knock you down and burry you”, and “now that looks like great skiing!”.

On the third day of the course the entire group skied up to Balu Pass in Roger’s Pass to study a snow profile. The scenery was amazing (but we forgot to bring a camera) and there was even some nice powder despite the alleged terrible skiing conditions (as non-skiers, we really wouldn’t know). The instructor must have thought we were being modest when we asked if we could take the course without knowing how to down-hill ski before signing up because he couldn’t hide his shock when I told him this was going to be the second downhill ski run of my life (and maybe my last).

While I began snow-plowing down the mountain under the amused guidance of the instructor, Chris climbed-on another hundred meters to reach the top of the Balu Pass. After taking in the spectacular views he proceeded to down with the same elegance as myself. By the end of the day, we could both manage turns with parallel skis and we even survived the ski on iced trails through trees, over bridges and along icy creek embankments.

From Revelstoke, we headed to Golden where we spent a few days enjoying the hospitality of my friend Alana and her boyfriend Chris, exploring the region, and working on our skiing skills. We took a day trip to Radium Hot Springs (to soak our aching bodies) and went cross-country and downhill skiing at Kicking Horse. We also spent one night in a sweet little off-the-grid cabin with a sauna on a buffalo ranch that we found on Air BNB.

Alana’s famous cat: The friendliest black cat to have road-tripped from Thunder Bay to Golden

Our own little cabin for the night 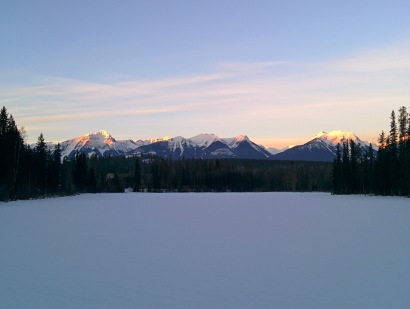 View of the Purcell Mountains from the Buffalo Ranch

Chris posing for the camera, wondering how he will proceed to ski down the hill

Feeling rested and slightly more confident in our abilities to avoid injuries in the back country, we went on our first overnight backcountry ski trip. We opted to ski into the Elizabeth Parker Hut on Lake O’Hara because 1) we heard it was gorgeous, and 2) the hut has a short easy approach (14 km). Our plan was to use this trip to gauge how we might fare under more strenuous circumstances. The outcome was not encouraging; Chris got major blisters on both feet and I developed a strong aversion to classic skiing with downhill skis. Despite this, we wanted more backcountry, more mountains, and we decided to try another overnight trip.

We headed to Field where we began preparing the long (23 km) trip into the Stanley Mitchell Hut where we hoped to celebrate Chris’ birthday. Having learned that skiing in is exhausting, we took advantage of the hard-packed icy conditions and walked 17 kms in with our skis strapped to Chris’ pack and the boots swinging off my own before strapping them on. Our strategy worked and we reached the hut in good time despite Chris’ massive blisters.

We slept at the Stanley Mitchell hut for two nights where we stayed warm by the wood stove and shared the company of two expert skiers from the Pyrenees in Spain, Maria and Sergie. With a full day in the mountains, we decided to venture out but even the smallest slopes seemed hugely intimidating. In the end we did a few runs on a shallow pass – shredding some sweet pow going a whopping 2-5 km/hr.

The ski out was hilarious and a little dangerous. Despite the difficult icy conditions, we made it back out to the highway with no injuries other than to our dignity. We saw cougar prints in the snow, and once again, opted to strap our skis and boots to our packs for a good portion of the way.

Chris heading up our little playground for the afternoo 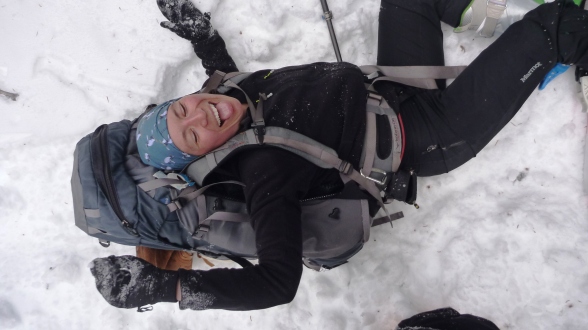 Here’s a good one of Curniss 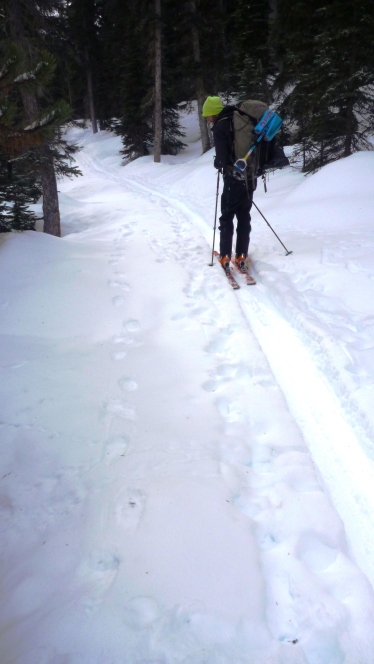 Once back in the town of Field, we toasted to Chris’ birthday and to our fairly successful initiation to the world of backcountry skiing with glasses of champagne by the fireplace in the beautiful Fireweed hostel we had all to ourselves.On our way back to Thunder Bay, we stopped by Ranchman’s in Calgary to pay homage to the site where a scene from Cool Running’s was filmed. Even though there was no line-dancing when we were there, Chris was pretty ecstatic to see the Jamaica Team bobsled hanging outside the bar. Back in Winnipeg, we went to Murphy & Carlos’ Mexican restaurant with some friends for dinner which in turn made me ecstatic. We are now back in Thunder Bay and back to cross-country skiing for a few more weeks. 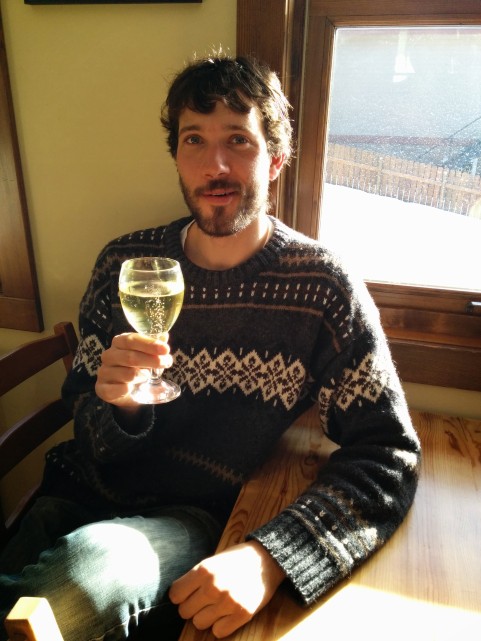 Celebrating Chris’ birthday and our trip

The bobsled from Cool Runnings