We’ve had a few friends ask us how much some of our trips cost, and I am sure there are a lot of people who don’t ask but would like to know. So for those who are curious or are planning to go on a roadtrip and want to get an idea of what it might cost to hit the road, we present our 2016 three week US roadtrip budget breakdown. When we set out on our latest roadtrip we agreed to keep track of spending so it wouldn’t get out of control. We wrote down everything we bought in a notebook and tallied up totals every few days to see where we stood. It’s a simple trick, doesn’t take a lot of time, and really helps stay on budget on longer trips. But that’s not all; we categorized things. Well, Curniss categorized things. She even made a pie chart to show the breakdown. Here is the gist of it…

On a roadtrip it’s not surprising that gas was our biggest expense. If the exchange rate was bad for us because the Canadian economy has become closely tied to dirty and expensive oil production in the Alberta tar sands, at least we enjoyed the benefits of cheap oil in the US. We would fill the tank for less than $30 CAD and in total we spent around $750 CAD on gas.

Coming in a close second for biggest expense: eating out! We both agree that good food and good drinks are worth splurging for but eating out adds up quickly. The total $730 CAD we spent in restaurants, bars, and coffee shops is mostly representative of the time we spent in Flagstaff, Portland, and Seattle. For the most part, we made our own food and had a lot of picnics.

In terms of sleeping, we camped out 20 out of 23 nights and still ended up spending just as much for three nights of roofed accommodations. Both types of accommodations cost us around $350 and we should note here that we camped for free quite a few times.

As mentioned earlier, we did mostly make our own meals but we really didn’t buy a lot of groceries. That’s because we brought a ton of food with us from Canada in anticipation of the high exchange rate and high food prices in areas of low population density. It turned out to be a very good call because some of the prices we were seeing were high even without considering the exchange rate. The total $300 we spent on groceries isn’t completely accurate then, and similarly the $100 we spent on beer and wine includes what we brought back home with us duty-free.

Finally there were things like fuel for our camp stove, soap suds, maps, used books, park passes, money to do get taxied to the start of a trail head or do laundry. In addition to camping fees, we spent about $230 on camping-related things and $200 on other random stuff.

In total, we spent around $3,000 CAD over the course of 24 days. This comes close to $125 CAD per day or $62.50 CAD per person per day and includes a $0.77 exchange rate. We could have easily spent a lot more money or been more frugal, but all things considered, it’s not that bad for close to a month of travelling and probably fairly representative of the costs of a camping roadtrip. 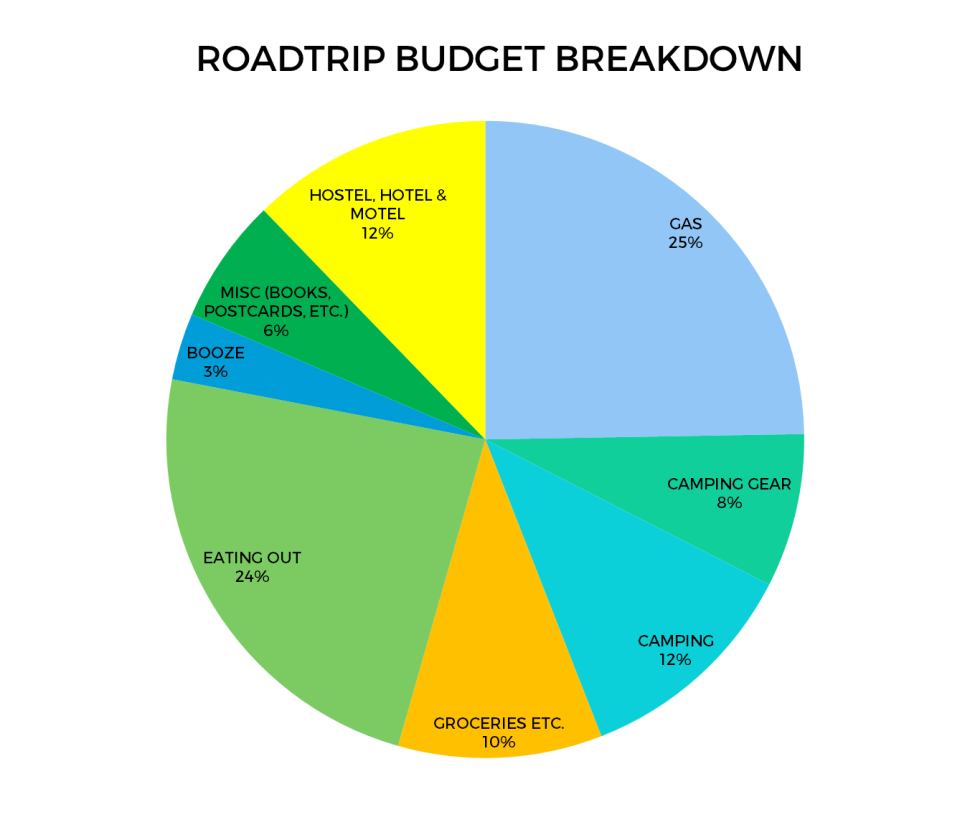