As we arrived to the Oregon coast, we left the thick rain clouds behind with the interior mountains and said hello to the sunny Pacific Ocean. We had a great time exploring little bits of the coast between the towns of Reedsport and Cannon Beach over three days. We saw tidal pools filled with sea creatures, whales swimming offshore, seals basking in rocky coves, walked along gorgeous beaches, hiked out onto exposed points, and saw some nice looking lighthouses. While we still camped along the way, we splurged on some delicious meals in local restaurants and cafés and really could have lingered here much longer.

Things that got on our radar for potential future trips:

A tip for anyone driving through Oregon:

You can buy a ten-day day-use park pass for $10 and avoid paying the $5-$8 daily parking permit fees that are required almost everywhere you want to stop. (Note: we bought our 10-day pass at a vendor in-person but can buy a one-year pass for $30 online.)  We checked out about a dozen parks and conservation zones along the way so this pass was a killer deal. 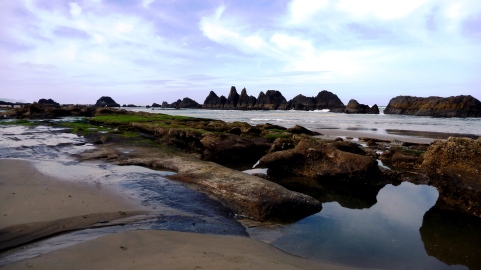 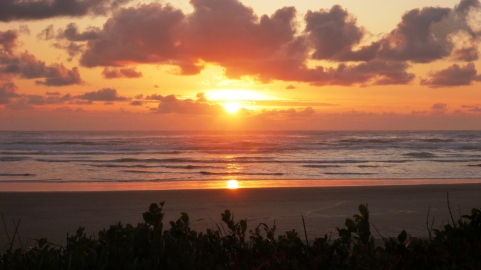 Sunset on the Pacific

Seals on the rocks 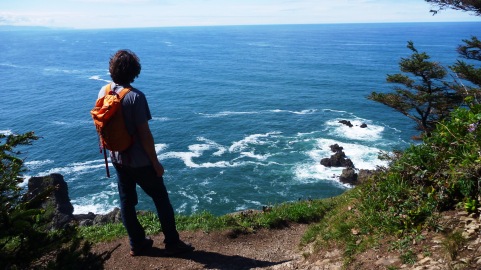 Portland for a day

From the coast we headed back inland to Portland. The HI International Hostel we stayed at was the prefect base to explore the city streets (which inspired many of The Simpsons character names) for the afternoon and do some much-needed laundry. We stopped by the famous Powell Bookstore, the world’s largest independently-owned new and used bookstore, to pick up new reading material, ate some delicious food, and sampled a lot of beers at a few different breweries including Deschutes, our go-to American brewery.

We continued driving north and took a detour to check out Mount St. Helens National Park. We were looking forward to seeing the impressive volcano up-close but had to settle with distant cloud-shrouded views since this national park, like every other national park we had visited on the west coast, was still closed for the season. It was a bit disappointing since there was no snow on the ground and we had been hopeful, but we still managed to access some trails for a few short hikes.

Much like Portland, we spent a day wandering the bustling street of Seattle and treating ourselves to good food and beer. We stayed at the Moore Hotel which we would definitely recommend based on location, price, and awesome eclectic hallway décor Another recommendation we would make is to have breakfast – the wild smoked salmon egg Benedict to be exact with fresh fruit juice – at the Bacco Café. It was so amazingly delicious. 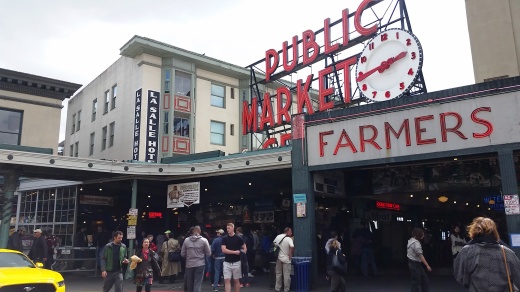 Enjoying the nice weather in Seattle

Perhaps the most unexpected part of our roadtrip took place in the northeast of Washington State. When we pictured Washington, we thought of the perpetually rainy west coast, old growth forests, snowy volcanoes, and the scenery depicted in the Twilight movies. We did not, however, expect to find a German town or deserts much like those in Utah which is exactly what we stumbled upon.

The City of Leavenworth was so bizarrely out of place that we couldn’t help but pull over, park the car, and walk around in amazement. Apparently when the once-industry-oriented town was on the verge of collapse after the railway was diverted, the local Germanic population came up with the brilliant idea to re-invent the town as a tourist destination for American fans of the Sound of Music and schnitzels – and it worked! After checking out the artisan fair in the main square, getting a giant pretzel and an ice cream cone we continued on and it was like the town magically faded away.

The other thing we weren’t anticipating encountering while driving back to Canada was more desert landscapes. But here they were in all their flat and arid beauty, kilometer after kilometer of flashback. It was perhaps the most fitting way to end this part of our trip which was, after all, centered on exploring the deserts of Utah and the Grand Canyon. We spent our last night in the US at the Steamboat Rock State Park on the rocky shores of the tranquil Banks Lake reservoir.

Chris with his pretzel in Leavenworth

Leavenworth (the photo doesn’t do it justice)