Following our visit to Zion National Park, we pointed our bearings west and began a long drive across the Nevada Basin along America’s loneliest road (also known as route 50). We set out on a day with ferocious winds and ended up driving most of the way in a massive dust storm in a perpetual twilight. After close to 900 km (560 miles) of driving through basin after basin of dusty, desolate arid wastelands, we finally made it to the border of California.

We were looking forward to checking out the volcanic landscapes of Lassen Volcanic National Park in California but our plans were foiled when we found that most of the park was closed until mid-May. Moving on, we stopped at the McArthur Burney Falls State Park to see the picturesque waterfall there, and then headed north on a series of US Forest Service roads in an attempt take a scenic shortcut across to Highway 139 but had to turn around due to deep snow leftover from winter. We did however find some impressive lava flow features including lava tubes on the side of the road and ended up camping amidst serene old growth pines that evening.

As we continued to travel northwest we drove past the 4,322 m (14,179 feet) Mount Shasta, an impressive snow-capped lone standing volcano rising from the valley floor, before entering Oregon. Our first stop in Oregon (other than to the closed visitor information centre) was at Crater Lake Nation Park. Unfortunately, like Lassen Volcanic National Park, most of the roads and trails were also closed here but with good reason: there were 6 m (20 feet) snow banks lining the road! We were still able to drive to the rim of the crater and peered down at the lake for a partial view in a snow blizzard. 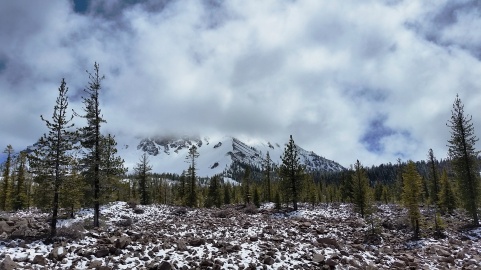 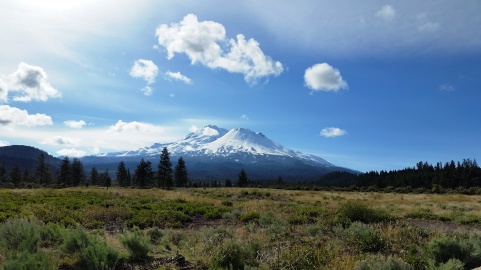 To warm up we decided to go check out the nearby Umpqua hot springs (off highway 138). On the way we stopped to admire beautiful waterfalls thick with spring runoff including the stunning Toketee Falls which spill over a remarkable columnar basalt formation. Hiking through the lush rain forest was a refreshing change to the desert environment we had found ourselves in days before and we savoured every moment… until we and our camping gear were thoroughly soaked. That’s when we decided to head to the coast in search of a balance between water and sun. 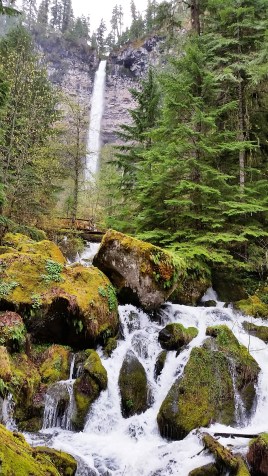