When we took off from Bali March 3rd, all we knew was that we would be landing in Bangkok at 15:45 later that day.  With the help of a Thailand Lonely Planet guide we managed to find in the Denpasar Airport, we gradually formed a plan for the ten days we would be spending in Thailand on our flight over.  In the end we decided to head south to the island of Koh Phangan in the Gulf of Thailand.

Getting to Koh Phangan from Bangkok

While we waited for our evening departure time, we spent the afternoon exploring a bit of Bangkok including Chinatown (where Chris drank sketchy looking “bottled” juice). The journey from Bangkok to Koh Phangan was long to say the least. It began at 19:00 on March 4th with a nine hour bus ride to Surat Thani, followed by an awkward transfer to catch a three hour ferry which brought us to Koh Phangan at 12:40 March 5th (almost 18 hours after leaving Bangkok). After checking in at the Utopia Resort, we were both looking forward to a shower and good night sleep. Little did we know, the sleepless nights were not nearly over (and not because of the full moon party that was taking place during our visit here – you can see where this is going). 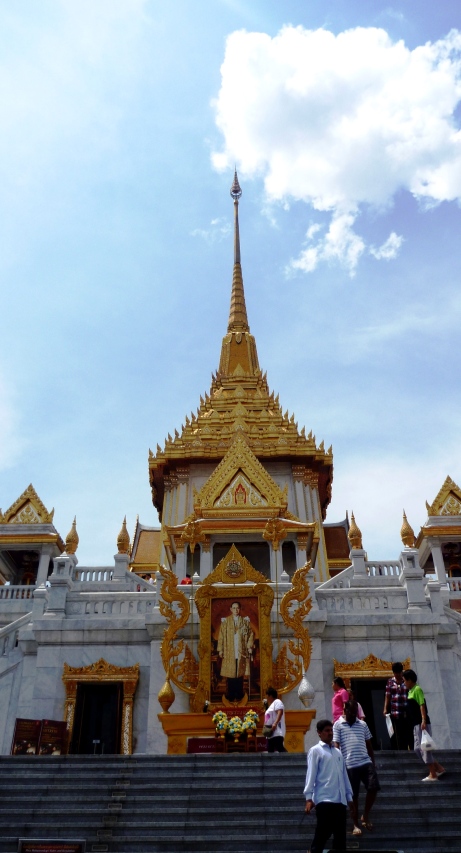 A temple and the image of the King 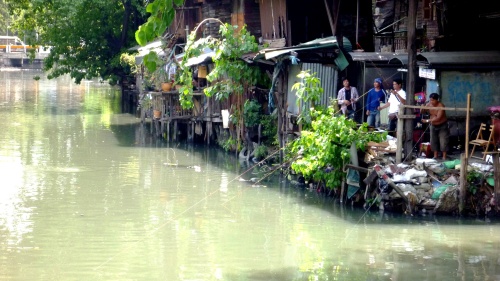 A game of kickball 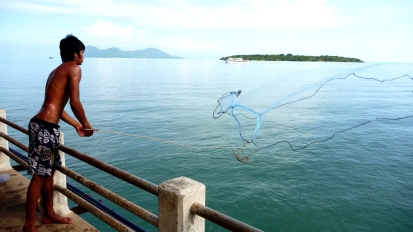 Fishing off the ferry dock

Unfortunately Chris developed a high fever almost as soon as we started to settle down (up to 102.4F from his usual 96.5F).  We made a trip to one of the hospitals on the island to have Chris tested for malaria, dengue fever and other infectious diseases and were sent on our way to await the results. Chris had 20+ bowel movements that night and we hoped his illness was just a common case of travelers diarrhea; however, the presence of blood and mucus in his stool suggested a more serious problem.  We finally got the results from the examinations at 20:30 the next day and were summoned to the hospital for an eight hour overnight treatment involving a variety of pain killers and antibiotics for an intestinal infection involving e-coli.

The next few days were spent staying put at the resort, with Chris sleeping 18 hours a day and feeling miserable for the time he was awake.  Curniss had to bring Chris to the hospital on the back of a rented scooter once more for additional treatments.  When Curniss wasn’t making concoctions for Chris to drink and feeding him pills, she spent her days reading, soaking in the sun, swimming, scooting around the fishing village of Chaloklum, and deepening her back-bends at a nearby yoga centre. She also had three snake encounters and was told about a cobra den on the resort property.

Three days after Chris initially fell ill, he still had intestinal problems, fever and severe abdominal pains. We decided to take a ferry to the larger island of Koh Samui which has a proper hosptial and an airport. We found Koh Samui and Koh Phagang fairly similar: beautiful tropical islands surrounded by bright turquoise water and sandy beaches full of tourists. Where Bali had a mixture of locals and foreigners, we found that these Thai islands had a mixutre of tourists who wanted to party, relax in resorts, or go on tours.

Thankfully, Chris began to recover during our last days in Thailand and we were able to continue our travels to China! If we go back to Thailand, we would probably head north around Chiang Mai and avoid drinking sketchy looking juice, or we might just stick to the Thai Kitchen in the future.

Part of a very long snake in the resort bushes 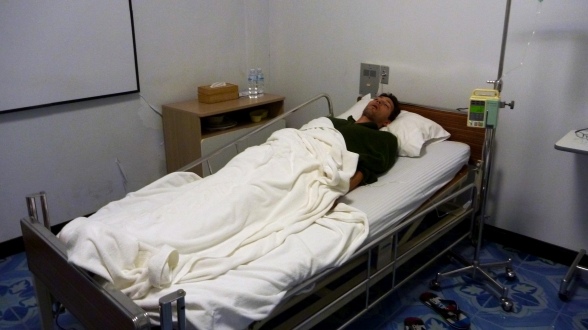 Chris at the Hospital looking rough

A work elephant we passed on our way to the hospital 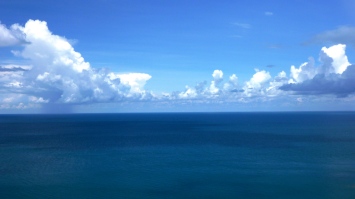 The view from our resort 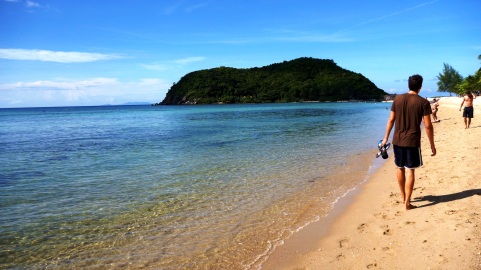 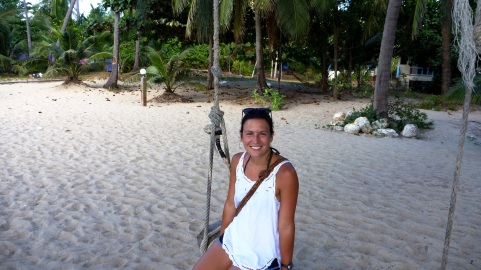 Curniss happy to see Chris out and about